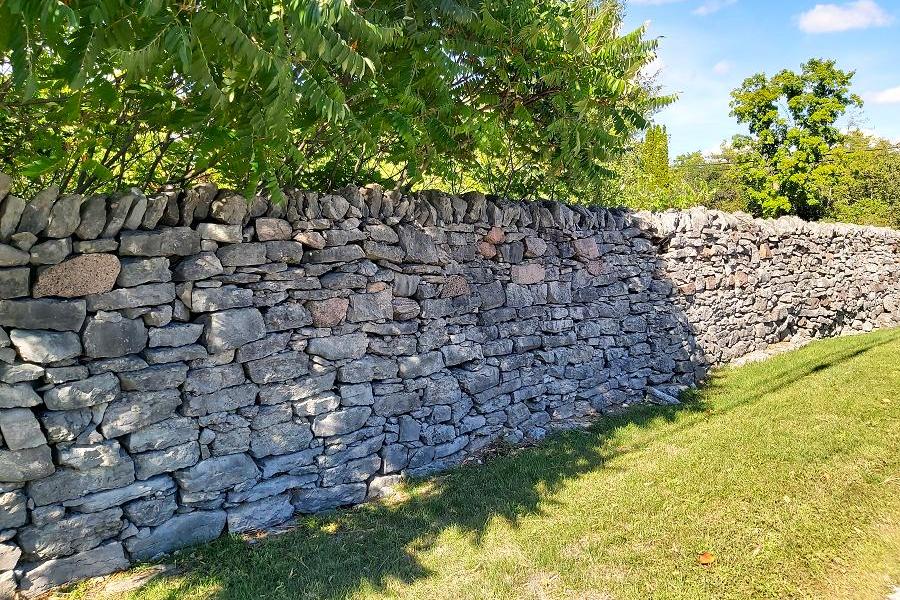 A group of Bobcaygeon volunteers are working on the restoration of a local historic monument and seeking community donations to help fund the project.

When European settlers arrived in Ontario in the 19th century, they brought with them the ancient tradition of dry stone walls – walls built from stone without any mortar to hold them together.

Very few drystone walls survive in the Kawarthas, with the notable exception of the Edgewood drystone wall at 28 Boyd Street in Bobcaygeon.

The wall was commissioned by WTC “Willy” Boyd, the son of 19th century lumber baron Mossom Boyd, as an aesthetic wall around the former Edgewood family estate built in 1891.

While the estate itself was demolished in 2005 (the Case Manor long-term care home is now in its place), a 400-foot stretch of the drystone wall along Boyd Street remains intact, although sections of the wall are deteriorating and in need of repair.

In 2020, a group of volunteers known as Action Environnementale Bobcaygeon succeeded in having the wall protected with a heritage designation and are now working on its restoration this summer for its 130th anniversary.

The group hired John Shaw Rimmington – a renowned dry stone wall builder and teacher who is also president of the Dry Stone Walling Across Canada organization – to work on the project and train volunteers.

Although Environmental Action Bobcaygeon has already received several grants and donations for the estimated project cost of $ 70,000, including $ 10,000 from the Bobcaygeon Horticultural Society, it is soliciting community donations to the Edgewood Stone Wall Fund at www.edgewoodstonewall.com .

“Now is the time for Bobcaygeon to come together again to help restore and protect the Edgewood Wall from further erosion and damage,” said Ann Adare, campaign manager. “You can donate to the project at four levels, each one representing one of the unique aspects of building dry stone walls. All donors will be recognized for their contributions over $ 25, regardless of level.

Building a dry stone wall (also known as a dry wall) requires a high degree of skill as the builder has to put the stones together in such a way that they are held in place and the wall remains stable. Common in Britain, Scotland and Ireland, dry stone walls were typically built using field stone by farmers in rural areas to fencing livestock or to mark property lines.

The Edgewood Stone Wall is an example of a double pile wall, the most common type of dry stone wall. Flat stones are used to create two separate walls, with larger stones covering both walls to add strength and stability.

The voids between the two walls are filled with small stones called heart stone, with crown stones (also called crown stones) placed on top of the finished triangular shaped wall.

In 2018, UNESCO added the art of dry stone wall construction to its Representative List of the Intangible Cultural Heritage of Humanity, stating in part that “Such structures bear witness to the methods and practices used by people. from prehistory to the present day to organize their living and working space. by optimizing local natural and human resources.

In the 19th century, it was common for wealthy families like the Boyds to build large estates with quaint landscaping reflecting a rustic aesthetic, including dry stone walls. WTC Boyd’s Edgewood Estate and his father’s adjacent estate featured dry stone walls as part of the landscaping.

The Edgewood Estate was designed by Peterborough architect John E. Belcher, a friend of the Boyd family, who may have also been involved in the landscaping. While it is not known who actually built the drystone wall, it is believed that the Boyd family brought in a stonemason from Scotland.

It is also believed that some of the stone used for the wall came from the construction of the Trent Severn Canal and that the Boyd family paid local farmers $ 1 for each load of stone brought to the Edgewood site.

“With the help of our community, we can ensure that our important and beautiful structures endure and preserve our history for future generations,” said Richard Fedy, Co-Chair of Environmental Action Bobcaygeon.

Environmental Action Bobcaygeon works in partnership with the Community Foundation of Kawartha Lakes to facilitate community giving. The foundation provides financial management and team expertise to assist with fundraising efforts for the restoration project.

As some stones have been lost over the years, the restoration project will need additional stones to restore the wall.

The current owners of the Mossum Boyd property have donated some of the stone from the drystone walls around their property, which has largely deteriorated, so that the legacy of the Edgewood Wall can be preserved.

For more information on the Edgewood Stone Wall restoration project and to donate, visit www.edgewoodstonewall.com. To contact the Restoration Committee, email [email protected]