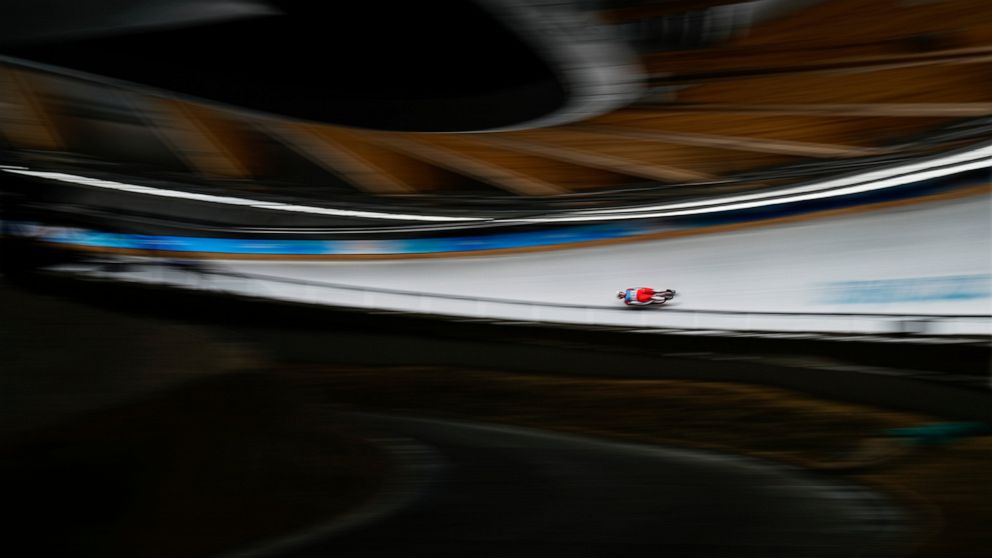 At the Olympics, the border between photo and painting can become blurred

BEIJING — A photograph is not a painting. A painting is not a photograph. Yet in the right situation, in the right hands, the two can come together and, under the best of circumstances, seem to merge.

Add to that the relentless scenes of dynamic movement that the Olympics provide – dramatic sets, unexpected movements, amazingly fit bodies performing at the height of their abilities – and you have a recipe for the gripping collision of the news and aesthetics, photography and art.

In short: Through the eyes and lenses of Associated Press photographers who train their eyes on the competitive arenas of the Beijing Games, real magic can sometimes happen.

“Some of these photos, you can’t do without them, they look like paintings,” says Denis Paquin, who would know. He has overseen AP’s Olympic photo reporting for more than a decade and has viewed thousands of images over the past two weeks.

Photography is sometimes called “painting with light”. With these images, it is truer than usual.

So slow down. Spend some time looking at these five images from the Beijing Winter Games and listening to the photojournalists who shot them. And think about what art is, what news is – and what photography can be when undertaken at the most thoughtful level.

THE SNOWBOARDER IN SILHOUETTE, by Gregory Bull

What it shows: China’s Su Yiming competing in the men’s slopestyle final on Monday.

Why it grabs you: Creates a dreamlike relationship between the highly focused snowboarder and the fuzzy mesh barrier, all backed by a scorching, blasting sun. Has something of the elemental feel of a 19th century tintype – the world seen through glass, dark.

What Bull thought: “This frame took a while to make. I had relied on very standard comps for most of that day. Using the beautiful facilities of the slopestyle course, I would leave room for the athlete to perform, amongst the backdrop of the Great Wall of Ice or the house. So for this photo I wanted to deconstruct, demolish my planned composition. I used the sun to dig a hole in the middle of the image and let the snowboarder rip the lines of the composition. With our cameras the auto focus is amazing but it follows the lines so I had to switch to manual mode and focus at the distance the snowboarder would be flying in the frame. Luckily, the snowboarder also won a medal that day, which was also nice.

THE SKATER IN THE RINGS, By Ashley Landis

What it shows: Denmark’s Viktor Hald Horup warms up during a light show before the start of the men’s 5,000 meter speed skating race on February 6.

Why it grabs you: The colors, so saturated and mottled with shadow and light. The dark grooves along the ice. Horup’s presence, right in the middle of the red ring, caught midway with his left leg in the air and his hand up, fingers showing. Diagonals, horizontal straight lines and circles that bring the image together. And Beijing 2022 right in the middle of it all. The feeling that this photo could represent the whole of the Winter Games.

What Landis thought: “It’s a very nice room, but the light is very even all the way across. It is therefore very difficult to obtain artistic images, such as silhouettes. However, before each session there is a light show of approximately 30 seconds. And the first few days there, there were no skaters on the ice warming up during the light show and I was like, ‘Wouldn’t it be great if we had somebody warming up and that he could cross the logo through the rings? ‘ So I went to the highest point we could go to see the light show, hoping someone would be on the ice warming up. Someone was, and it turns out that he went through the rings at the right time.

THE BLUR SLEDGE, by Pavel Golovkin

What it shows: Natalie Maag of Switzerland slides in the women’s luge event last Monday.

Why it grabs you: Scale, first of all – the brightly colored little athlete, very focused and moving through a vast apparatus. The color contrast and complementary curves that work with the blur to create a pleasing sense of movement.

What Golovkin thought: “You need to create more than just images of athletes running down the track, and one idea is to use a long shutter speed. It’s also good if your focus object stands out from the background not only for displacement, but also for contrast. Natalie Maag’s brightly colored costume contributes to this.

What it shows: Canada’s players huddle before a women’s hockey quarter-final between Canada and Sweden on Friday.

Why it grabs you: The point of view, of course. But also the pictorial quasi-symmetry anchored by the hockey net and reinforced by the red numbers and names on the black jerseys. Plus the contrast between matte uniforms and shiny black helmets – and the only white.

What Josek thought: “Almost all the teams get together before every game and we take a picture using a remote aerial camera. Sometimes it works, sometimes it doesn’t. I cropped this image tighter to get a bit different frame than previous matches. Also, this time the Canadian ladies had their uniforms black, which I think really contrasts with the white rings and the white goalie helmet.

THE REVERSED SUNSEEKER, by Francisco Seco

What it shows: Canada’s Mark McMorris competing in the men’s slopestyle qualifier on Feb. 6.

Why it grabs you: Something is wrong – in the best way – because the athlete is upside down. The eye is drawn back and forth from the sun to the silhouette, and the whole frame seems frozen in time – even more so than most photographs. It’s like a moment that could last forever.

What Seco thought: “I love silhouettes. Basically, I’ve been looking for this picture since we started covering snowboarding. That day I photographed the first qualifying lap from another position to get a picture of each driver. Then I saw the location of the sun and thought it might be a good opportunity to try some silhouettes. I moved to the right side of the track, just after the last jump. I wandered around a bit before finding the right place to shoot. Then I shot down a few riders in the second run. I got lucky with Mark McMorris. (I would really like to mention that our photo editor, Kiichiro Sato, did a great job editing it, so I would like to share any photo credit with him.)”

THE MACHINE OF MOVEMENT, by Matthias Schrader

What it shows: Canada’s Matthew Soukup races down the hill during a men’s large hill training session on Thursday.

Why it grabs you: Diagonals. The touch of red in the corner that completes the middle of Soukup’s outfit. the jagged fragments around him, some sharp and some blurry. The absolute sense of the trajectory that the whole image conveys.

What Schrader thought: “I took this photo at the start on the ski jump tower. Apart from in-air and landing action footage, we also need a few long exposures and features to split the photo galleries. This is the moment, captured on a 16-35mm with 1/10 at f 5.6. Everything is a bit blurry and nice effects can be created.

Students from the University of Sherbrooke embark on cave painting