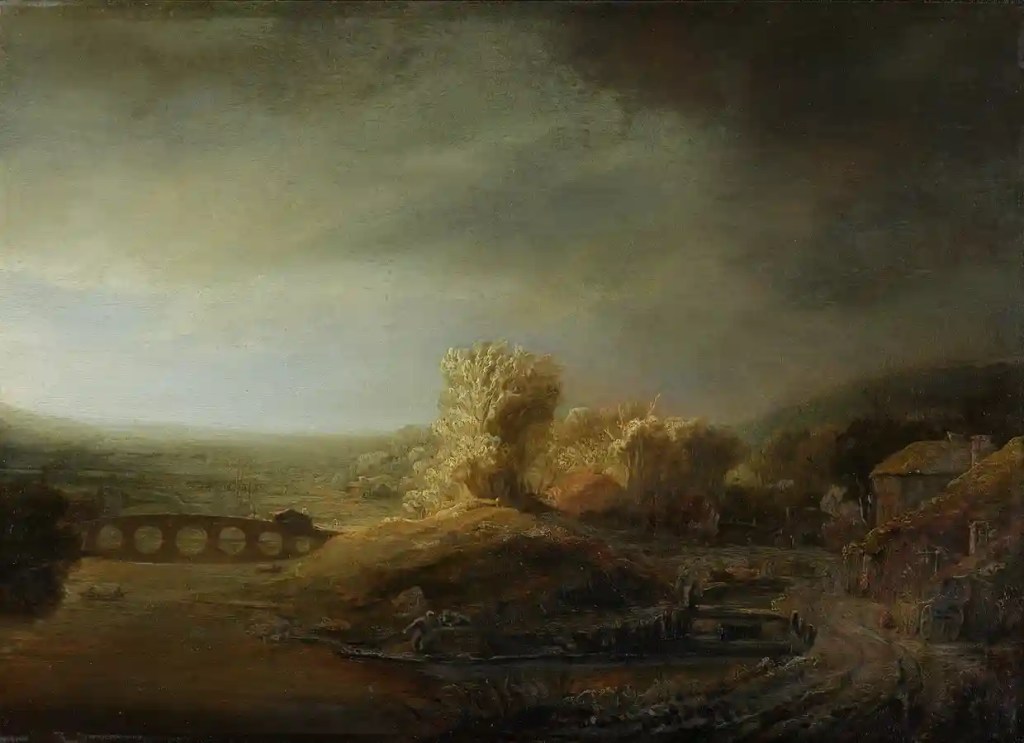 The Gemäldegalerie acquired Landscape with arched bridge in 1924, when it was attributed to Rembrandt. The work came from the private possessions of Friedrich August II, the last Duke of Oldenburg, whose prodigious art collection was sold after the abolition of the German monarchy.

Like many of Rembrandt’s innovative landscapes, it depicts the Dutch countryside dramatically lit by sunlight and shadow. The museum hailed the acquisition as filling an important gap in the narrative it presents about Rembrandt.

In the late 1980s, the Rembrandt Research Project, made up of Dutch art historians who judge by consensus the authenticity of Rembrandt around the world, reassigned Landscape with arched bridge to Rembrandt’s pupil, Govert Flinck. Defending their decision, they cite the painting’s “surprisingly deep stylistic, technical, and thematic similarities” to an earlier Rembrandt, landscape with stone bridgeheld by the Rijksmuseum in Amsterdam.

In other words, they thought it was an ostensible attempt to replicate a Rembrandt, like a forger tracing a signature.

Determined to restore the Berlin painting’s attribution, the Gemäldegalerie used technological advances in painting analysis to assess the paint’s age and application. Scholars have determined that it was painted before the Amsterdam landscape, explaining the latter work’s more sophisticated manipulation of light.

Rembrandt also returned to the work in the Gemäldegalerie several times to revise composition and color, settling on a denser atmosphere. In contrast, the Amsterdam painting is sharper and the sunlight thicker, implying that the worst of the storm is over.

Decisively attributing a work to Rembrandt is often a controversial task. He had a large workshop and a titanic visual impact on European painting, inspiring many imitators. It is common for an alleged Rembrandt to have its authenticity stripped and then later restored.

In 2020, a 400-year-old portrait from the collection of the Allentown Art Museum first credited to the Old Master, then in the 1970s reattributed to Rembrandt’s studio, was determined to have been executed by the Dutch painter.

A century ago, some 700 paintings were attributed to Rembrandt, but by the end of the 1960s the Rembrandt Research Project had reduced that number by nearly half. Institutions such as the National Gallery in London, the Museum of Fine Arts in Boston, and the Metropolitan Museum of Art in New York have faced challenges over the authenticity of alleged Rembrandts in their collections. In the case of the Met, the labels of two works—Portrait of a man and Portrait of a Woman—have been updated to read “From Rembrandt’s studio”.

Rembrandt’s independent historians objected to the project’s validation system and its resistance to outside opinions. Today, the energy of the group is devoted to the elaboration of a complete catalog of Rembrandt’s work. Most major arts institutions now have their own team of researchers.

Despite his influence on the genre, Rembrandt painted few landscapes. The reattribution of the Berlin painting brings the number of landscapes known to the artist to seven. Landscape with arched bridge is currently on display in the exhibition ‘David Hockney – Landscapes in Dialogue’, which includes Hockney’s series ‘Three Trees Near Thixendale.

Together, Hockney and the restored Rembrandt create a “striking conversation,” according to the Gemäldegalerie.

The 8 Best Paints for Glass Painting