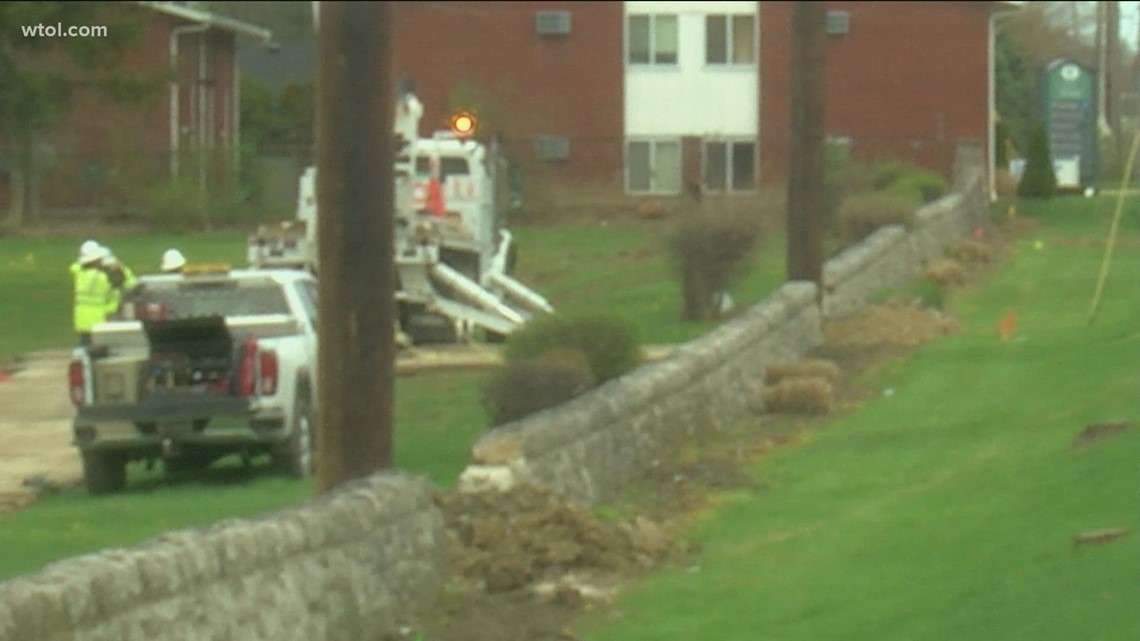 The Toledo Memorial Park wall has existed for a century in Sylvania. But soon it will be demolished to make way for the widening of Monroe Street.

SYLVANIA, Ohio – If you exit at Monroe Street in Sylvania, you’ll notice the traffic cones, crews and equipment.

“The City of Sylvania and ODOT have decided that they need to widen this section of Monroe Street,” Toledo Memorial Park Chairman Jeff Clegg said.

First Energy workers are busy replacing telephone lines in preparation for the street widening. Unfortunately, the project forces the historic stone wall of the park to collapse.

“When that’s done, then the rest of the wall will most likely come down and they’ll start doing the actual construction,” Clegg said.

The wall has stood for almost 100 years and now has to make way for the posts. The park was going to celebrate the centenary of the wall in June, but that has since been canceled due to the destruction to come.

“Obviously this is progress and Monroe Street is very busy, and we want to do everything we can to make sure everyone is safe,” Clegg said.

Sylvania Director of Economic Development Bill Sanford says the project is a necessary part of the city’s progress.

“You think again, that [Monroe Street] was a one-lane road when the cemetery opened. Now Monroe Street is a major thoroughfare, east and west, through our city, so it’s a very difficult situation,” Sanford said.

Sandford said the Ohio Department of Transportation (ODOT) identified the Monroe and Harroun intersection as unsafe and ordered it repaired.

Although the historic wall is gone, a replica will be designed about 25 feet from its original location in a few years. However, Clegg says seeing the original wall disappear is saddening.

“We have always considered this beautiful stone wall with the roses growing on it in the spring to be the gateway to Sylvania,” he said. “And now it will all go away.”

Clegg says the replica should be built by 2025.

And for roses? Clegg says the park is healing them until the new wall is ready to pick them up.