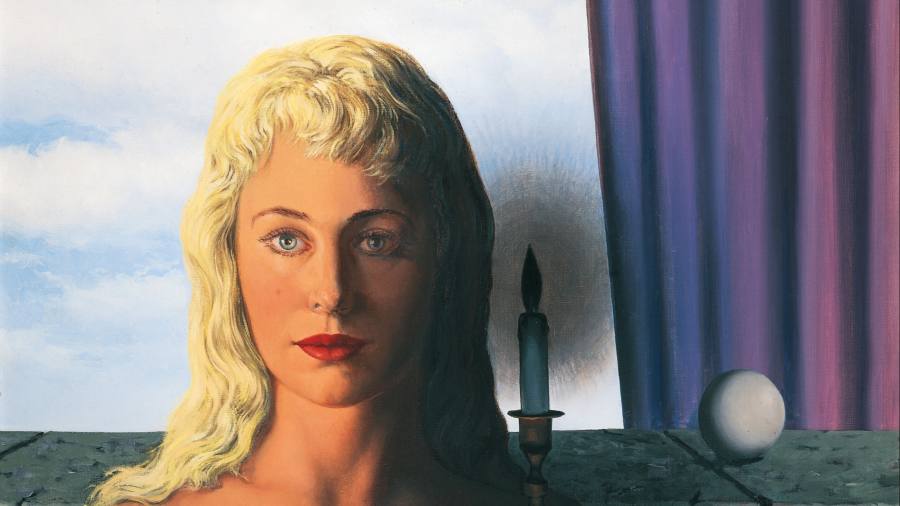 “I was really his painting”. My life with Magritte

Anne-Marie Gillion Crowet still remembers when René Magritte announced that he would make her a version of his famous painting, The Empire of Lights. A quintessentially surreal concoction from the Belgian – it shows a house plunged into darkness, its windows illuminated under a paradoxically clear blue sky – it was a hit the first time he made one in 1948; aided by 16 subsequent versions he made, it became one of his most beloved images, inspiring, for example, the poster for The Exorcist.

“He knew I loved the painting,” says Gillion Crowet, a Belgian baroness who had known the artist since she was young – her father, lawyer and businessman Pierre Crowet, was one of the first patrons of the painting. ‘artist. “So he said, ‘I’ll make you one,’ and I said, ‘I want the biggest one! And he succeeded – he put all his genius into it. Between the genius and the relative size (the canvas measures 114cm x 146cm), it explains why she is now selling it, via Sotheby’s, with a starting price of £45million – the highest price ever expected for a Magritte, and one of the highest estimates ever for a work of art in Europe.

Gillion Crowet was a close friend of Magritte until his death in 1967. His personal image was quite classic, even bourgeois, often dressed in a simple suit, but she promises he was anything but: “He was surreal by all pores !” However, she also puts a lot of emphasis on the fact that he was “real”, meaning that he was simple and unassuming. “His surrealism was not an act, as was the case with many other so-called surrealists” – alluding to someone like Dalí, much more “on brand”. The first time they met, when she was 16, he compared her to a horse. She had come to his studio to have her portrait painted, and had sat down next to one of his paintings, The beautiful idea (1950), which combines a woman’s body and a horse’s face. “He looked at me, smiled and said, ‘See, I was painting you before I even met you.'” (The beautiful idea is quite elegant, and she’s only ever taken it as a compliment.)

Magritte had, it turns out, made works using his features even 10, 20 years in advance, imagining his face even before seeing it; and then, when he had, producing still more, The ignorant fairy, which ended up on a Belgian stamp, to a vast 16 m frieze at the Palais des Beaux-Arts in Charleroi. That’s why she struggles when people call her Magritte’s muse. “I think I was more than that to him. I really has been his painting.

Gillion Crowet is full of odd little details about their friendship: how he was obsessed with lobster so that was pretty much all she had ever served him, and how when she went to dinner, “there was a table with a huge tablecloth falling all the way to the floor, and when you stretched your legs you found a huge paper clip underneath. She felt the influence of Magritte everywhere. “He taught me to become like him, to see things in a different way. It is a virus that catches quickly. She is still sad, however, that she refused to let him paint her when she was newly married to Roland Gillion. Certainly, he wanted to represent her made of precious stones, with a bag of blood attached to her head. Young Anne-Marie, who wanted something nice to give her husband, refused. “And he was furious! So disappointed, and he never did the picture… I was so young, so stupid. Instead, Magritte painted it much more classically, with a flesh-pink rose next to it, but “he called it ‘Le Combat’ – because it had been a fight!”

Magritte gave him Gillion Crowet Empire of Lights over 60 years ago, and she had it in her living room until she lent it to the Magritte Museum in Brussels from 2009 to 2020. She is adamant it is her masterpiece. “It meant so much to him – he was proud of the perfection he had achieved in directing it.” She notes with admiration that he “played with all the blacks of the canvas in an extraordinary way – the different tones he managed! It was very modern, really, compared to what he was doing, which were more charming little pictures – it’s really a strong image.” She calls Magritte an “excellent painter”, which is almost a surprise, as the power of his images arguably exceeded much of the consideration of his craft. “Yes, I don’t understand,” says- her. “It’s a mistake. He really knew how to paint.

But why is she selling it? “I consider it a world masterpiece, and I can’t be selfish and keep it in our collections. I think this photo should travel the world and be seen and admired by everyone. As for the expected huge prize, “I have no idea,” she insists. “I have to say that’s the side of things that I really don’t like, but that is necessary. And this is important for Magritte. Maybe she needs it for her other purchases – she’s been an insatiable collector for decades, donated a huge art deco collection to the National Museum of Belgium or recently published a book about her latest. passion, Moroccan Berber jewelry. She also has other Magrittes, but “they stay at home”, she promises, to be left to her daughter and her grandson. But this Empire, she insists, is a special case. “I think it’s my duty to send him trotting around the world. Everyone must see it. here.”

Gillion Crowet actually filled a special bar in the basement with Art Nouveau furniture just for Magritte. The artist “hated elevators – was afraid of them”, and she lives on the sixth and seventh floors, so she prepared a “rather fun 1900s-style bar” downstairs where she would entertain him for dinner. Once there, however, he took offense to one of her symbolist birdcages in which she had put a straw bird. “What did he say are are you doing with that straw bird in a cage? And I said, ‘honestly, René, what do you want me to put in there?’ He replied: ‘an egg!’ So he brought her an ostrich egg, and she put it in the cage instead. “All surreal memories,” she sighs, her delight still clear in her voice.

No, Pfizer does NOT have any part of Neil Young’s publishing catalog

A tour of David Hockney’s new series of paintings