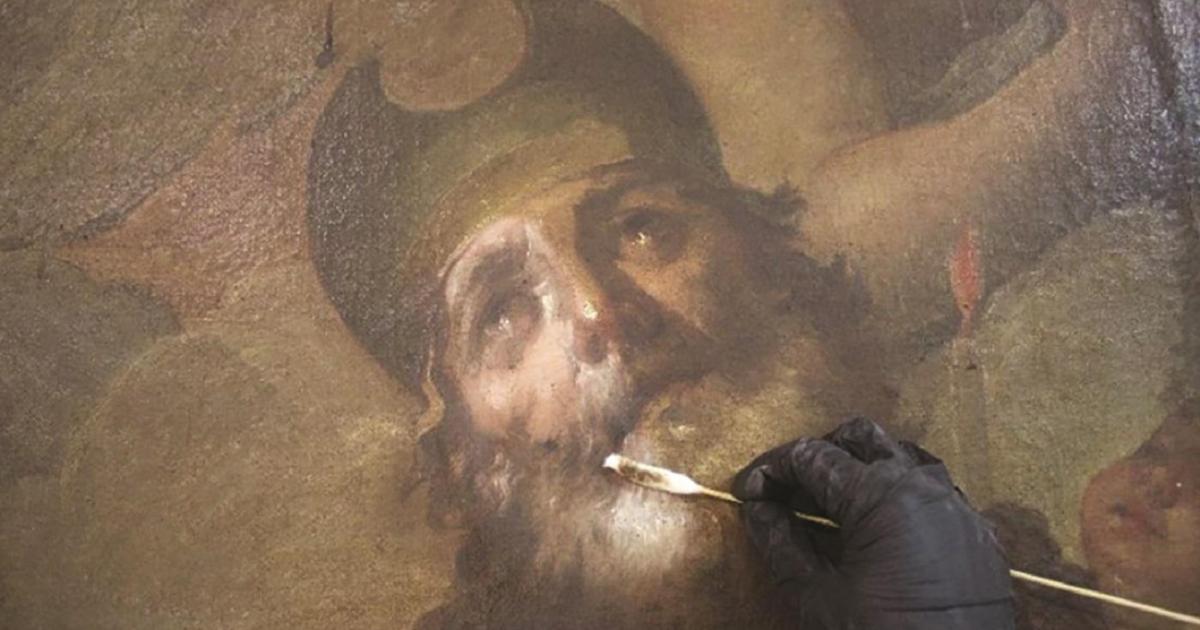 An artistic masterpiece by Maltese Baroque artist Francesco Zahra (1710-1773) has been brought back to its former glory through a meticulous process of preservation and restoration.

The restored painting, The Presentation of Jesus in the Templewas unveiled on April 29, in time for the annual May celebrations commemorating the 279th anniversary of the town of Qormi as Città Pinto.

The painting of The Presentation of Jesus in the Temple by Francesco Zahra before and after conservation and restoration.

On June 23, 2021, Father Mario Mangion, Archpriest of St George Parish Church; George Sciberras, rector of the Confrérie du Saint-Sacrement within the said parish; and Joseph Bugeja, who was overseeing the nomination process, announced that this long-neglected Zahra painting had been approved for restoration.

The monumental painting hangs in the right transept above the St. George Parish Altar, which commemorates the Purification of the Blessed Virgin Mary and the Presentation of Christ in the Temple (also known as Candlemas or il-Festa tal-Gandlora).

The painting was photographically documented in normal, grazing and UV light before carrying out the restoration work.

In May 1743, Grand Master Pinto de Fonseca officially recognized Casal Curmi (also known as Casal Fornaro) as a city and Pinto’s shield with five inverted red crescents crowned by a fortified castello was adopted on its coat of arms. However, the parish of Qormi dedicated to St George is much older. It is one of the oldest surviving parishes in Malta, so much so that it was listed in the Quiterniolus Pro Concordia Taxarum inventory, compiled by Bishop Senatore De Mello de Noto in 1436.

Through the ages, Qormi became a melting pot, where various social and religious activities were organized by the devotees who used to gather in nearby hamlets and villages. Most likely, an official parish establishment already existed in Casal Curmi before 1436.

The year 1584 marked a new beginning for the social identity and ecclesiastical history of Qormi. A new parish church was built, towering over the local townhouses and overlooking the surrounding rural areas. Qormi was the first Maltese town to pioneer the construction of a new parish church in accordance with the architectural revival and fine artistic taste introduced by the Jerosmolitan Order of St. John soon after the Great Siege of 1565.

The original plans consisted of a central nave flanked by two aisles. In 1630, two transepts were built to amplify the church in a Latin cross plan. The facade was built in 1636 and a decorative sculptural scheme added to it, the designs of which are attributed to the early 17th century Maltese architect Tommaso Dingli (1591-1666). In 1684, the church was finally crowned by a majestic dome designed by the famous Maltese architect Lorenzo Gafà (1639-1703).

The modifications of the 1630s took about two decades. Subsequently, the interior of the church is richly decorated with Baroque altarpieces in keeping with the decorative style of the 17th century. The documentary research of the historian Joseph Grima confirms that the Brotherhood of the Sacrament was in charge of the maintenance of the right transept. Carving work on the prospect of the stone altar was in full swing in 1656. The embellishment was completed in a short time, certainly before 1662.

“This work is the fruit of the golden age of Zahra”

This documentation also sheds light on the order for the altar painting representing The Presentation of Jesus in the Temple. Count Saverio Marchese (1757-1833) confirmed in his journals that it is Zahra and praised him as “… una delle più belle opere del bravo pittore Maltese …” (“…one of the most beautiful works of the virtuoso Maltese painter…”)

Zahra came from a distinguished family of Senglean stone carvers. His father was the prolific stone sculptor Pietro Paolo Zahra (1685–1747). Francesco Zahra’s career as an artist spanned four decades and was a crescendo in both artistic quality and volume of commissions. His manner matured into a baroque style strongly influenced by the chiaroscuro very fashionable in Naples, a constant reminder of the eternal influence exercised by the Calabrian master painter Mattia Preti (1613-1699) on the islands.

By 1745 Zahra had surpassed his tutor Gio Nicola Buhagiar (1613-1752) and had become the most prolific Maltese painter, rivaled only by the French Classical Baroque artist Antoine Favray (1706-1798). The latter was working in Malta at this time, mainly fulfilling commissions from the Hospitaller Order of St. John. In the mid-1750s, Zahra’s style developed further. His ever-increasing confidence in rendering multi-figured compositions in more refined and colorful settings brings him closer to Favray’s manner.

It was the conservator-restorer Pierre Bugeja, director of Prevarti Ltd who, with his team, undertook the meticulous conservation process of The Presentation of Jesus in the Temple.

This included undoing most of the damage done by previous post-war restoration interventions.

The painting was photographically documented in normal, grazing and UV light before carrying out the restoration work.

According to Bugeja, the work can be confirmed to be entirely by Zahra’s hand and made in the 1760s. (The first three digits easily read as “176” while the last digit remains a dubious 1 or 7.) Among art historians and connoisseurs, the hand of the master painter has never been in doubt. However, it was unanimously accepted that the work was made in the 1750s and no later.

In light of this discovery, as confirmed by fellow art historian Sandro Debono, this work is the fruit of Zahra’s golden age when he had a fruitful artistic relationship with Favray, which perhaps involved be a collaboration on certain works.

Debono praises Zahra’s genius and artistic dexterity in composing a work that shares an affinity with the dignified French Baroque manner imported by Favray and is highly comparable to Zahra’s magnum opus produced for the parish church of Saint-Philippe from Żebbug (The Ordination of Saint Philip of Agira1753, and the Death of Saint Philip of Agira1753) and the decorative scheme of the chapter house of the cathedral church of Mdina (Apotheosis of Saint Paul1755-1756).

In conclusion, allow me to reiterate the sincere pleasure and gratitude with which the artistic community and the public welcome this initiative and the hard work required to undertake this colossal task. Hats off to those who helped make this project a true celebration of local and national identity.

The project was co-financed by the European Union under the LEADER+ program with the help of the Fondation GAL du Sud-Est.

Independent journalism costs money. Support Times of Malta for the price of a coffee.