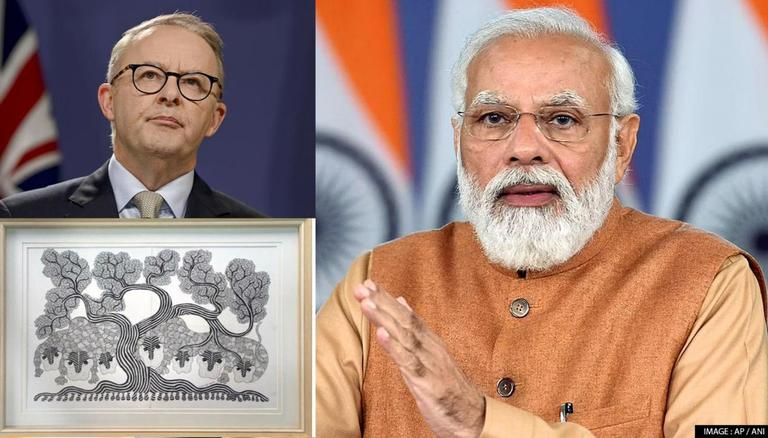 What is Gond Art paint?

Gond paintings are a popular tribal art form that originated in Madhya Pradesh. The word “Gond” is derived from the word “Kond”, which means “green mountain”. Gond art is believed to be quite similar to Australian Aboriginal art. The Aborigines, like the Gonds, have their own creation stories. These two art forms are separated by thousands of miles in terms of geographical distance between their creators, but they are strongly linked in their sentimentality and emotional core, which are the distinguishing characteristics of each art form.

Gond paintings are composed of dots and lines and were used as pictorial art on Gond walls and floors. This is done during the construction and reconstruction of each house, using locally available natural colors and materials such as charcoal, colored earth, plant sap, leaves, cow dung, limestone powder, etc.

At the Quad summit, Prime Minister Modi praised Albanese, saying his attendance at the summit just 24 hours after taking the oath demonstrated his dedication to the Quad. On Monday, Anthony Albanese was sworn in as Australia’s 31st Prime Minister. In Saturday’s election, his centre-left Labor Party defeated his predecessor Scott Morrison’s Conservative coalition. For nine years, the coalition was in power under three prime ministers.

According to the Foreign Ministry, the two prime ministers expressed their willingness to maintain the positive momentum in bilateral relations. Furthermore, Prime Minister Modi has invited the Australian Prime Minister to visit India as soon as possible. The MEA said in a press release: “The two leaders reviewed the multi-faceted cooperation within the framework of the comprehensive strategic partnership, including in trade and investment, defense manufacturing, renewable energy, including including green hydrogen, education, science and technology, agricultural research, sports and people connections to people.”