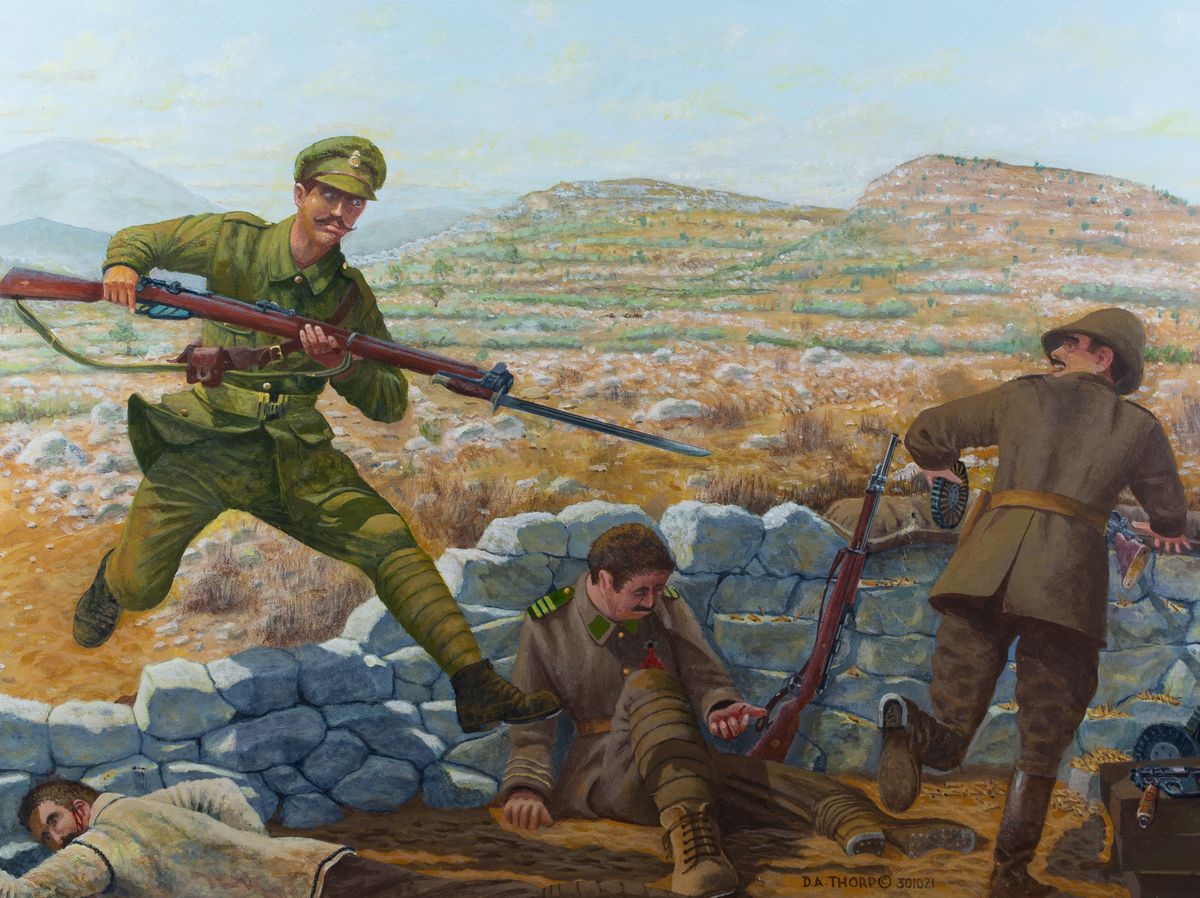 The depiction of Private Harold Whitfield of Oswestry storming a Turkish machine gun position is the second in a trilogy of paintings David made for D (Shropshire Yeomanry) Squadron Royal Yeomanry, based at Dawley Bank.

Whitfield, from Middleton, served in the Shropshire Yeomanry, which in 1917 became the 10th Battalion of the King’s Shropshire Light Infantry, meaning both regiments can claim the honor of the VC Award.

He received the VC, the highest honor for bravery, for his actions in the fighting north of Jerusalem in March 1918 when he single-handedly attacked a Turkish machine gun post, killed or bayed the entire crew, and then a pointed the gun at the advancing Turks.

Whitfield, then promoted to sergeant, received the VC in person by King George V in a ceremony in Leeds in May 1918.

David has done extensive research for his depiction, which is painted in acrylic on panel.

He said: “The original idea for the painting came from Captain Nick Trevor, who planned to have a trilogy of paintings, the one in the center commemorating the history of the Shropshire Yeomanry, and to hang a painting on either side of it. ‘a notable award – on one side a painting of the action by Private Harold Whitield, VC, and on the other side a painting that will commemorate the award of a military cross, which I have not yet started .

“One thing Nick was sure about was that he didn’t just want a standard portrayal of these heroes, he wanted an action painting of each one symbolizing how they got their awards.

“I had received basic information from Nick and got the rest via the Internet. However, I spent a considerable amount of time researching the Turkish element that I had no knowledge of. and bobtail outfit, and relatively poorly equipped.

“The painting took 157 hours to complete. It was a bit tricky when I discovered that the terrain was not, as I expected, all sand and palm trees, but terribly inhospitable rocky ground that asked quite a bit of research on google earth. I have never painted, so can stones!

The first painting in David’s trilogy is already hanging in the Dawley Bank military center. It reflects centuries of regimental tradition and history in a composition that includes The Wrekin, Monte Cassino in Italy – scene of a bloody battle in 1944 – and features with symbolic meaning.

Whitfield was celebrated as a hero upon his return to Oswestry. He died in 1956 after being knocked off his bike by an army vehicle while returning from work at Express Dairies in Whittington.

Her beloved Victoria Cross had her own adventures. In 1976, it was stolen from an Oswestry Bank safe by a 21-year-old bank employee who attempted to sell it, but the medal was quickly recovered.

It was presented by his family in 2000 to the Soldiers of Shropshire Museum – formerly called the Shropshire Regimental Museum – at Shrewsbury Castle, where it is on display.

A good quality replica of Whitfield’s VC that was discovered under mysterious circumstances in London not too long ago is also on display.

The finder said it lay on Clerkenwell Road, although documentation from the time of its donation to the museum in 2010 indicates it was found in the area of ​​the arts centre’s elevator shaft pit. Barbican.

To date, no satisfactory explanation has been found as to why such a compelling replica has been created.

Falling in love with art: the pleasure of collecting paintings | Painting