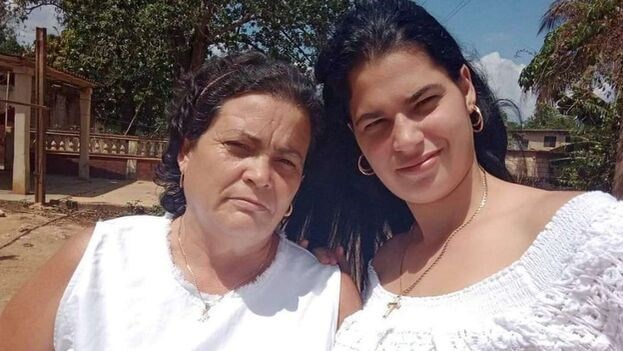 Sissi Abascal, a young Cuban woman who started protesting at 16 and hasn’t stopped

“That day we were at home and I connected to the internet through my mobile phone. There I started seeing the videos of the protests”

HAVANA TIMES — At 16, Sissi Abascal Zamora wasn’t, like any other teenager, walking around with her friends or wearing new clothes. At this age, she joined the Ladies in White Movement and she lived between arrests and police operations. On July 11, 2021, her participation in the popular demonstrations of that day landed her in prison with a six-year sentence.

Her mother, Annia Zamora Carmenate, has no doubt: “Sissi is a political prisoner”. From this quiet girl, who stood out from her brothers for her calmness, she became one of the most consistent activists in the province of Matanzas. In the small town of Carlos Rojas, the young woman – on 11J (July 11and) she was 23 – performed in an intense protest with dozens of neighbors.

“That day we were at home and I connected to the Internet through my mobile phone. There I started seeing the videos of the protests, first in San Antonio de los Baños, then in Havana , so I talked to my husband, Armando Abascal Serrano about it,” Zamora tells 14ymedio. “Then Sissi told me that people were gathering in Carlos Rojas Park.”

The family lives on the outskirts of town and when they got out on the road there were already other people waiting for them. “They know that on other occasions we have also protested.” In November 2020, the Abascal family was part of the group of residents of this community, belonging to the municipality of Jovellanos, who demonstrated in the streets against the long blackouts.

For a long time, saying the surname Abascal among the neighbors is like remembering that the first name of the town was Cimarrones, from the name of the slaves who did not accept the actions or the whip of the foreman and fled into the surrounding mountains . But these rebels today are not confronted by slavers with dogs, but by gendarmes brandishing their tonfas and locking them up in dungeons.

“We continued and arrived at the park. It was great. Everyone joined us. Immediately, two State Security officers appeared and took my husband to the station in front of the park. The arrest emboldened the protesters. “We were joined by people we had never seen at other protests we have led.”

Sissi climbed onto a bench, “Suddenly a sheet appeared. We put it on the sidewalk and wrote ‘Patria y Vida’ [Homeland and Life] on it.” She took off her shoelaces and I gave her mine too. With this we tied the fabric to a branch of a flaming tree on one side and on the other we tied it to a crutch We put the sign on a bike and started riding around the park. Homeland and Life is a Grammy-winning song by popular Cuban artists that synthesizes discontent on the island.

This month of July, the town of Carlos Rojas, like the whole island, was going through critical days. “In the municipality of Jovellanos there was a very intense epidemic of covid-19, we had no medicine, the isolation centers had very bad conditions,” Zamora recalls. The lack of freedoms combined with the economic crisis and the epidemiological situation. That Sunday, patience reached its limits.

Zamora closes his eyes and seems to be reliving that day. “People gathered in the park and shouted Food! Freedom! Down with the dictatorship! We want medicines”, also “Patria y Vida!, this slogan was the one that was repeated the most, the one that will go down in history: there were old people, children and many young people too”.

Then the patrol car arrived to transfer Armando Abascal Serrano from the city police station to Jovellanos. “People stood in front of the vehicle to prevent it from moving, but the police inflicted many blows on it and finally took it away,” she said. For the rest of the afternoon, those who remained continued chanting until around 6:30 p.m. when a bus and a truck with shock troops arrived.

“In the bus and the truck were Yonaikis Villegas Oviedo, the mayor of Jovellanos, also the representative of the Communist Party, the director of Inder (National Institute of Sports, Physical Education and Recreation), members of the political police dressed in civilian clothes, the members of the Government, of the Party and the head of the Communals”, lists the mother of the family.

“They came with sticks and stones in their hands, later we learned that they were even carrying bottles. It was a very strong attack. They hit me and I fell against the bicycle holding the sheet, Sissi fell on top of me. Zamora adds that the communal official attacked her in the head, eyes, arms and stomach. “I had just had surgery and passed out so I couldn’t see my daughters anymore.”

When she came to, she heard someone yell at her that Lisi, her other daughter, had been injured after being hit several times in the head with a bottle. The mother ran to the Polyclinic and on the way her shoes came undone, the shoes whose laces had helped to tie the sign. She found her daughter there, who was having her head bandaged. “She also had a hand with backward facing fingers that the orthopedist had to fix to put them back forward.”

Shortly after, Sissi also arrived at the polyclinic, having been beaten. Half an hour later, the three women were transferred by ambulance to Jovellanos. “There were a lot of injuries there because the police had dealt many blows. They gave my daughter Lisi a certificate of injury, because they had to put stitches on her head, but they didn’t want to give anything to Sissi and me.

That day they were able to return home and on Tuesday July 13 they went to the municipal police station to file a complaint for Lisi’s injuries. “Even today, ten months later, neither the police nor the prosecution give details, they are still elusive,” laments Zamora.

The family patriarch disappeared for 14 days. “We brought him some clothes at Jovellanos police station and they stole them, they never gave them to him. He was imprisoned for two months in the Combinado del Sur, then he was fined,” the woman explains. “On the morning of September 20, an official from the Municipal Court of Jovellanos arrived and knocked on the door of our house. She had in her hands a request from the prosecutor for a six-year sentence against Sissi.

The trial took place on November 3. During the trial, they judged not only the young woman, but also Frank Ernesto Trujillo Hervis and Yoendris Torres Corría, as well as 11J demonstrators. “Frank – when my daughter was beaten up – he took her out of the women’s group. He is now sentenced to six years in prison.

During the trial in the Municipal Court of Jovellanos, Zamora attended as a witness: “I entered, I made my statement and then I could only come back to hear the conclusions. It almost gave me a heart attack to hear so many lies. Prosecutor Odilia Casallas García blatantly lied. She said that since 1959 no one had been mistreated and beaten by the police in Cuba.

Sissi’s sister couldn’t stand this, she got up from her seat and contradicted the prosecutor. “Our family has been hit several times. I still have stitches on my head from being hit with a bottle. Immediately, the guards took him out of the room.

Interior Ministry mayor Silvia Martínez Montero has charged Sissi with assault and contempt, although the family insists the officer was not present at Carlos Rojas Park on Sunday. “The trial was a farce, a clown show. Even the defense lawyers couldn’t do their job,” denounces Zamora.

The appeal trial was held on December 27, under an intense security operation, and the six-year prison sentence was confirmed. The young woman was incarcerated in the women’s prison of Matanzas, Labiotec. “It’s an unpleasant and sad place. There are two buildings and she is in one of them in cabin three on the third floor.

But during the phone calls, the great concern of the young woman is not the conditions of detention but her family. To calm her mother, she repeats: “Don’t worry, remember the number of dungeons, beatings and detentions that I suffered. She also wants to know the details of the other prisoners of this historic day of protests.

When Annia Zamora Carmenate asks her daughter what she wants her to bring in the bag of food she tries to pack every visit, the young woman asks little or nothing. Although her mother insists, she responds in monosyllables. In these moments, she becomes again the shy and quiet girl of the city of Carlos Rojas.