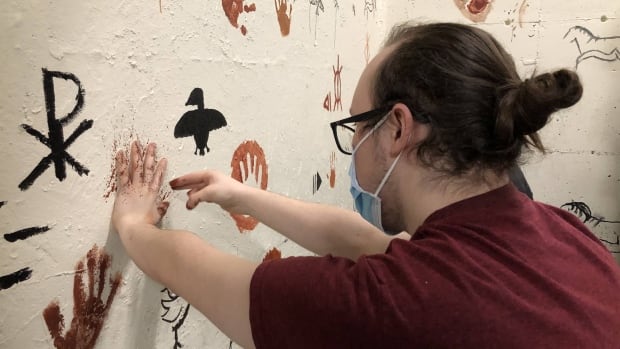 Students from the University of Sherbrooke embark on cave painting

A group of history students from the University of Sherbrooke knew they would be studying prehistoric cave art this semester, but they had no idea they would be creating cave paintings themselves.

Adelphine Bonneau, an assistant professor in chemistry and history, got permission for her class to put the theory into practice on the concrete walls of a network of tunnels under the university.

“After a lesson where I explained how people do [cave] paintings, I offered to reproduce them – with ingredients that we know were used by these people,” she said.

“Then they tried to apply their mixture, their paint, on the wall with different techniques”, says Bonneau, “with their fingers, their hands, pencils, sponges… [or] blowing the paint through a straw.”

Prehistoric cave painters would probably have used the blood of much larger mammals, the professor said, but pig’s blood was the best her butcher could do for her.

Bonneau explains that rock painting encompasses “all sorts of representations…on rocks and stones”, whether engravings on massive rocks, small rocks near rivers, rock shelters, or caves. .

She says cave painting is a specific type of cave painting that usually depicts animals, humans, or mythological creatures. Cave paintings are mainly concentrated in Europe, Indonesia and Australia, but paintings and engravings have also been found in smaller quantities on every continent except Antarctica.

The Bonneau students aren’t trained artists, but they said getting out of the classroom to try something different was a refreshing change of pace.

“Often the problem with [studying] history is that we see it in two dimensions, as if we were looking down on past events,” said student Nicolas Thiffault. “It’s always more difficult to get to the heart, to know how people felt at the time. This class allows us to do that.”

The students said they also appreciated being able to do something together in person after so much of the last two school years had been spent in isolation.

“As we don’t study art, none of us are very good, so we all had smiles on our faces,” said fellow student Gabrielle Nicol.

“We’re discovering things we wouldn’t normally draw, and it’s helped motivate us to come to class.”

Bonneau says her history class painted about 100 different characters in a section of the university’s publicly accessible underground tunnels.

“The cave paintings are supposed to be secret,” she said, “so I won’t tell you exactly where they are.”

At the Olympics, the border between photo and painting can become blurred