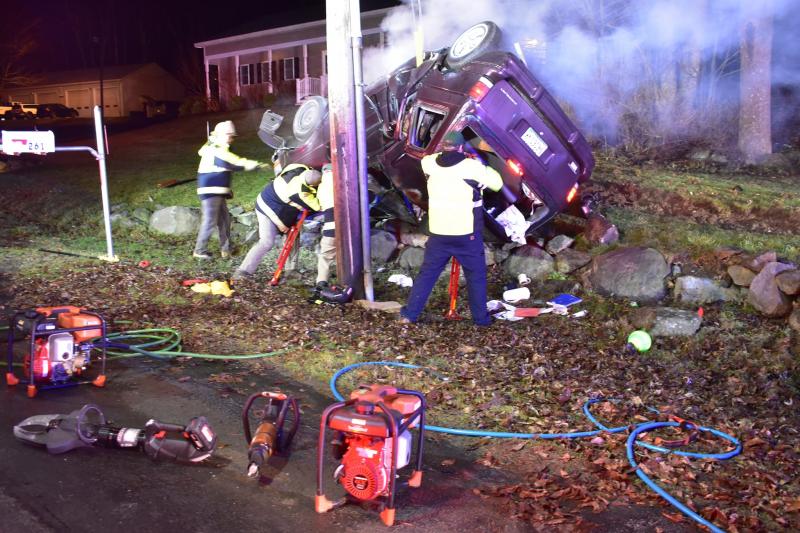 With a pickup truck stabilized on a rock wall, firefighters extricate a woman after the midnight Rockport crash

ROCKPORT — The call came just after midnight, April 10, of a single vehicle crash on Route 1 in Rockport, with a Dodge Caravan wrapped around a utility pole.

When first responders arrived – 13 members of the Rockport Volunteer Fire Department, police officers from Rockport and Camden and an ambulance crew from Northeast Mobile Health Services – they found a female driver trapped in her van , who was upside down and precariously balanced on a stone wall, supported by a utility pole guide wire.

As he walked towards the accident, Rockport Fire Chief Jason Peasley learned from Rockport Police Officer Jake Powers that it was necessary to get out of the van, and when he arrived, it was obvious that the work required additional technical equipment. He called the Rockland Fire Department, which responded with a five-man team.

Rescue work involved stabilizing the vehicle with rescue struts and ropes tied to nearby trees, while Steve Laite, a Rockport firefighter and owner of Camden Exxon, ran a winch cable from the car to his truck.

“It was probably the most technical extrication we’ve ever done in our career,” Chief Peasley said.

The woman was consistent, he said, and was removed from the vehicle about 45 minutes later. She was alone in her car.

She was traveling south on Highway 1 when she left the road near the entrance to Camden National Bank’s Fox Ridge business offices.

The car traveled at least 30 feet in the air, Peasley said, before hitting the Central Maine Power pole.

After the woman exited the vehicle, North East transported her to Pen Bay Medical Center in Rockport.

The Rockport Fire Department reported the incident on their Facebook page, adding, “…we know from the damage to the car, that person is lucky to be alive and we all pushed a sigh of relief when we got the occupant out. . It never ceases to amaze me about our participation. It was tricky and dangerous, extremely technical and yet the team shows up, steps in and works together to get the job done with EVERY CALL.

This story will be updated when more details become available.

The life of Roman painting’