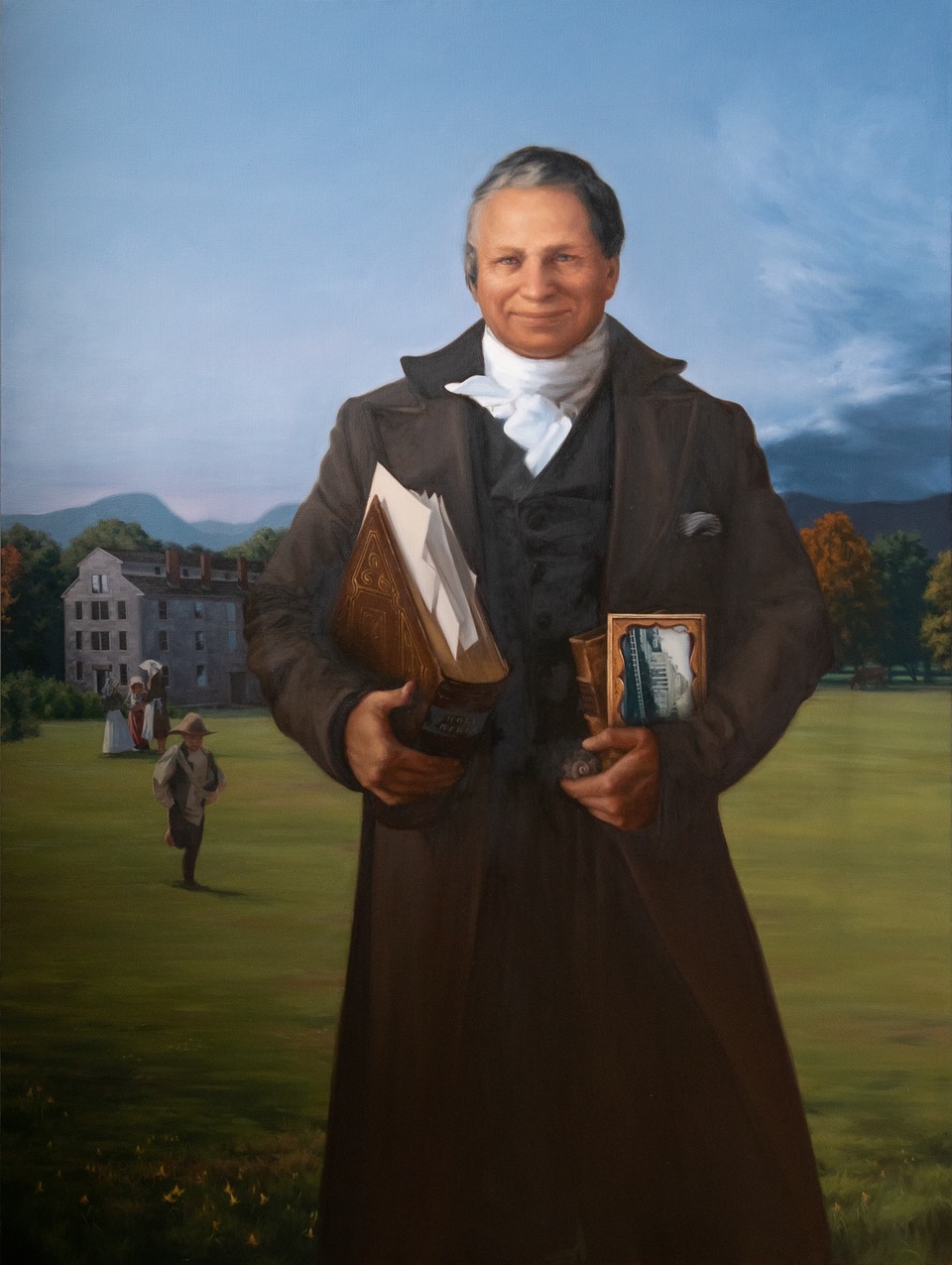 These remarks by Katie Runde, a realist oil painter based in Bristol, came as her portrait of Alexander Twilight was unveiled May 5 at the Vermont Statehouse. His paintings are in the Edgewater Gallery in Middlebury. She is also a wood player and a candidate for the priesthood in the Episcopal Diocese of Vermont.

To say it was an honor to have been chosen to paint this portrait of all portraits would of course be an understatement.

Now, there are many more people to thank than I have time to list now, but I have to start with David Schutz and National Life for making this possible in the first place – and the Friends of the Statehouse, who have not only been helpful every step of the way, but also…friends.

Thanks also to the portrait committee. I never thought I would say this, but this committee was a pure joy to work with, and this painting wouldn’t be what it is without them. They kept me up to date with historical details and also helped contribute valuable insights that we later incorporated into the planning process. This painting was truly a group effort.

I also have to give special thanks to Bill Hart for his help at every stage of this project. He not only helped introduce me to Twilight from a historical perspective, but also the perfect role models I needed to help bring Twilight to life, including, at one point, himself. Thanks to Bob, Molly and Carmen from the Old Stone House Museum, who helped me get a sense of Twilight and its world.

There was no way to begin this portrait – or design it, really – without first listening. I’m a white woman, for one thing. How can I hope to understand the experience of being biracial in America without listening to those who are?

The list of logistical hurdles to overcome to create this portrait is long:

You’ll notice some key elements of the portrait, including Athenian Hall, the four-story granite dormitory he helped design and build himself. We have his students: notice the girls. Twilight ran a coeducational high school in the 1830s. The other student runs up to him to show how much Twilight was loved by his students.

The committee and I had a lot of conversations about how to integrate the second Statehouse and the landscape of Brownington into one place, so he holds a daguerreotype of the Statehouse in which he served.

He also holds William Paley’s “Natural Theology” and a fossil to represent the grounding of his theology in nature. You may also notice that to the right of the sky, a storm system lurks; we have the intersection between darkness on one side and light on the other, and this threshold – twilight – in between.

Last but not least, I had to take a tiny, gritty, austere daguerreotype and discern from there what Twilight’s prankster smile must have looked like.

This complicit smile, you see, is fundamental.

By commissioning this portrait, we not only celebrate Twilight as a great Vermonter of color – this is crucial – but the ramifications of Twilight’s introduction into the People’s House are even greater. After all, a state portrait pays homage to Vermonters of power and prestige.

What other images of power do we see in the Statehouse? We cannot ignore that the overwhelming majority are male, white and of considerable privilege, not to mention a significant military presence. You’ll notice Twilight smiling across the hall at Vermont’s Spanish-American war hero Admiral Dewey astride his battleship with its guns on fire.

You see, Twilight brings with it into the House of the People a radically different kind of power. He is not only a person of color, but also an educator and a pastor – a leader who is dedicated solely to uplifting others to live their full potential. This is not leadership by domination; it is leadership through service and relationship.

Think for a moment about the motto of our state of Vermont: Liberty and Unity. Today, we’ve taken one more step to make that happen.

After all, there can be no unity without diversity – the diversity of races, creeds, gender identities, sexual orientations, the variety that makes humanity so vibrant.

Nor can there be unity where one group has power at the expense of another. You’ve probably noticed that the list of people in this country routinely dehumanized by written and unwritten laws is growing: people of color, Indigenous peoples, LGBTQIA+ people, those trapped in the cycle of poverty, our prisoners, and now, as we have recently learned from the leak in our own Supreme Court, everyone with a womb.

Yet there can be no unity when a Vermonter is unattended, unseen, uninvited or unheard. And where there is no unity, there is no freedom.

In the words of Calvin Coolidge: If the spirit of liberty should fade away in other parts of the Union, and the support of our institutions languished, all could be replenished from the generous reserve held by the inhabitants. of this brave little state of Vermont.

May we in Vermont strive to be a beacon in these pivotal times.

Today we took a big step in that direction. May we not delay taking another, and another, until we can finally free ourselves to run.

Did you know that VTDigger is a non-profit organization?

Our journalism is made possible by donations from our members. If you appreciate what we do, please contribute and help keep this vital resource accessible to everyone.

Matisse: The Red Studio – a painting on paintings stuns at MoMA