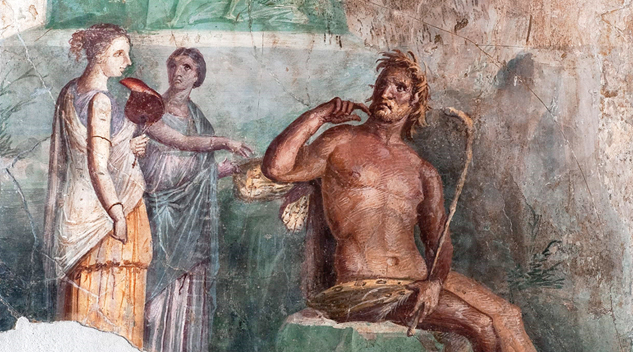 The life of Roman painting’

NEW YORK CITY – I’m not sure if “Painter at Work,” the first-century AD fresco from the Surgeon’s House in Pompeii, is the oldest image of a woman painting, but it’s the oldest I’ve ever seen. saw. And, like all of the works from “Pompeii in Color: The Life of Roman Painting,” currently on display at New York University’s Institute for the Study of the Ancient World, they are stunning in so many ways. That this work, and so many others, survived the eruption of Vesuvius in 79 CE and the subsequent entombing of the city of Pompeii in volcanic ash and rock is in itself a miracle. Moreover, it is one of the few places in archaeological history that shows us a culture at a specific point in time. Contrast that with an essay I wrote for these pages not long ago on Stonehenge, where the challenge for archeology is to make sense of a sacred place that has witnessed many cultural changes over the centuries of occupation – a condition that is more the norm in the area – and you will get a sense of Pompeii’s unique character.

But of the approximately 35 frescoes in the exhibit, gleaned from a larger number recently displayed in Oklahoma City, Okla., and all in the collection of the National Archaeological Museum in Naples, Italy, “Painter at Work” struck me do a double take. Indeed, it is a work of deliberate duplication. “Painter at Work” is a painting of a painter painting a painting – held at an angle by a child so we can see it – a painting not of an old man, but of a statue of an old man on a pedestal. The statue and the painting of the statue are mirrored by the pair of women – clients, perhaps, or patrons – on the right, peering – stealthily? – from behind a pillar, watching the painter at work. We watch the women who watch the woman paint, just as those who resided in or visited the Surgeon’s House would have done.

Excavations have been going on at Pompeii since the beginning of the 18th century and show no signs of slowing down as new discoveries are made every year. The frescoes in the Maison du Chirurgien, for example, were brought to light in 1771. If the walls of the room on which “Painter at work” was painted are, as the sumptuous catalog that accompanies it indicates, in poor state of preservation, drawings made in the 1770s, and published later, give an idea of ​​the context of the work. In this case, “Painter at work” was surrounded “by an intricate decor with richly decorated architectural side panels of tritons, seahorses and donor figures…” (cat. p. 92) On the wall opposite, a fresco of a seated man, writing, under the gaze of two women, surrounded by a similar decor is another duplication, celebrating the twin arts of painting and writing.

Many frescoes, like those in the exhibition, have been removed from their walls and framed like paintings. Today, archaeologists leave the works in situ as much as possible. Context, which is a central focus of the exhibition, leads to stronger hypotheses about the anonymous artists who painted the frescoes, the patrons who commissioned them, the rooms they decorated, the relationships between images and , by extension, what they may have meant to those who lived with them, and what they might have meant to those who visited them. Perhaps those who inhabited the House of the Surgeon considered themselves amateur painters and writers, or perhaps they wanted visitors to take notice of their patronage of the arts. Or both. “Painter at Work”, taken out of context, is intriguing. Doubling is a figure or trope that we usually associate with more recent artists and artworks – Diego Velasquez’s 1656 painting, “Las Meninas”, to name just one. In its original context, however, as one envisions “Painter at work” versus the fresco of the writer at work, the possibilities multiply and the work becomes a social statement as much as an artistic creation.

In terms of duplication, another fascinating aspect of “Pompeii in Color: The Life of Roman Painting” is the repetition of images from popular mythological stories in different houses, painted by different hands at different times. The figures in these frescoes are similar to each other and are often positioned almost identically in the picture plane. It’s hard to describe in words, but easy to see when you look at the two versions of “Achilles on the Isle of Skyros”, one from the House of Achilles, the other from the House of the Dioscuri.

The story of Achilles on the island of Skyros is apocryphal, Iliad-adjacent tale in which Achilles, not wanting to go to Troy, hides at the court of King Lycomedes on the island of Skyros. When Odysseus and Diomedes come looking for him, he appears, dressed as a woman. When Odysseus, still the cunning Greek, asks a soldier to sound the call to battle on a trumpet, Achilles reflexively grabs his swords and shield and reveals his identity. In both renderings, the central group – Odysseus on the right, grasping Achilles’ arm, Achilles placed in the center, right hand on the shield, looking at Diomedes, who grasps Achilles’ right arm. Despite the losses of the House of the Dioscuri version, there are further congruences in the background figures, columns and architectural details, and in the ground objects in the foreground. The two shields, for example, represent the young Achilles and his teacher, Chiron the centaur.

Installation view of ‘Pompeii in Colour: The Life of Roman Painting’, 2022. Image ©Institute for the Study of the Ancient World. —Photo Andrea Brizzi

All of this begs the question: how did Roman fresco painters paint and how did they create these “copies?” One of the rooms in the exhibition partly recreates the story of painters leaving their work and fleeing at the start of the eruption of Vesuvius. A wall fragment preserves an artist’s drawings and a gridded red line made by snapping a pigment-covered string against the wall. Salvaged plumb lines and squares show how the artists measured the area and ensured the grid squares were identical and square. Pigment cups, also recovered, correspond to the cup in the hand of the “Painter at work”. As for the images themselves and their curious copy, the researchers speculate that this could have been achieved in four ways, none of which are mutually exclusive:

“1) from a model-book that captured all the details of a particular painting; 2) from an outline notebook which resembled the pattern notebook but only recorded the outlines of figures and backgrounds; 3) from a book of figures with sketches of individual figures or simple groups; 4) from memory. (cat. p. 38.) It would have been relatively easy to transfer images from a book onto a gridded wall, make adjustments to suit the surrounding space and decor, and then add your own style to the fresco. Despite their anonymity, this type of coordination evokes teams of painters, perhaps workshops or corporations. It also suggests that people may have visited each other, liked the paintings they saw, and commissioned versions for their own homes.

On reflection, some works stand out. The sulphurous yellow and red tones of the “Architectural Landscape” glazing of the Villa of the Papyri, Herculaneum, appear to be the direct result of exposure to the sulphurous fumes of Vesuvius. At the top of the stairs, a ghostly form is sometimes seen as a person with, possibly, a dog. A half-vanished abstraction, the almost formless form is a strange appearance within an appearance.

The humor raises the tragedy of the end of Pompeii and reveals another facet of Roman life and thought. ‘Banquet Scene’ or ‘Symposium’, from the House of the Triclinium, Pompeii, depicts people seated in the beds of the triclinium, or dining room, covered with cloth while they chat, flirt, drink, serve, and vomit. This is the time near the end of the party when the bad behavior has just started. As a bonus, readable Latin words, believed to have been added before the eruption – from the volcano, not from the party guest – are scratched above the numbers. The one above the number on the right reads “Bibo” (“I drink”). In the center, “Valetis” (“Be well”) seems to refer to our friend who abused. Besides that, “Isisa” might just be the name of a guest of someone in the house. That this fresco was painted in a dining room suggests that it is some kind of mirror, a humorous but cautionary tale against exactly this kind of party, which leaves a bad taste in your mouth.

The age-old myth in art history holds that Roman art was composed of defaced copies of lost Greek masterpieces. Greek artists worked in Rome and inspired Roman artists even at Pompeii, but a cursory comparison of the works on these pages with images of Hellenistic art shows that in almost every aspect Roman art followed its own way. Stories, like that of the timorous Achilles in women’s clothes who cannot resist the noise of battle, the playful notions of duplication, the trompe-l’oeil painting of architectural details, the very human humor and the pathos – leveling the fads gods and humans – depicted in frescoes, Roman art depicts the Roman world as the Romans saw it.

I had the pleasure of visiting “Pompeii in Colour: The Life of Roman Painting” with Dr. Clare P. Fitzgerald, Bernard and Lisa Selz, Exhibitions Director and Gallery Curator at ISAW, accompanied by my daughter , Lucia. Lucia and I have been following the events of Pompeii since we read Holidays under the volcano – a die Magic tree house children’s books – in which Jack and Annie find themselves in the doomed town days before the eruption. Like Jack and Annie, Lucia and I invite you to run, run as if a river of lava were chasing you, to see “Pompeii in color: the life of Roman painting”. ISAW is a stone’s throw from the Metropolitan Museum of Art. You won’t regret the quick detour or the extra time it takes to see this once-in-a-lifetime exhibit.

“Pompeii in Color: The Life of Roman Painting” will be on view through May 29 at New York University’s Institute for the Study of the Ancient World at 15 East 84th Street. For more information, 212-992-7800 or www.isaw.nyu.edu/exhibitions/pompeii-in-color.

With a pickup truck stabilized on a rock wall, firefighters extricate a woman after the midnight Rockport crash