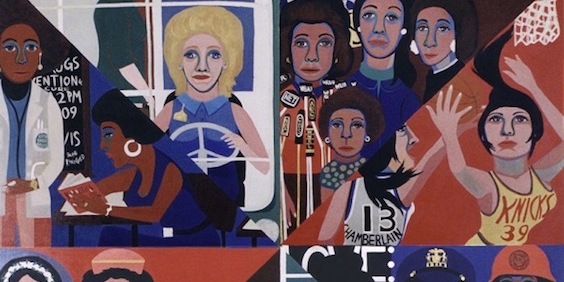 A 1972 work by Fatih Ringgold will pass from the Rikers Island Women’s Correctional Facility, where she resided for five decades, to the Brooklyn Museum following examination by the New York Public Design Commission. Eight square foot oil on canvas For the Maison des Femmes, represents women in various professions, including those of bus driver, construction worker, president and basketball player. Ringgold produced the painting after receiving a grant from the Creative Artists’ Public Service (CAPS) in 1971 to create a public work and, the following year, chose the Rikers Women’s Center as his home. In a 1972 interview, she explained her decision to move her there. â€œI asked myself, ‘Do you want your job to be somewhere that nobody wants it, or do you want it to be somewhere where it’s needed? These women have been rejected by society; they are the guilt of the blood of society.

The work was whitewashed in 1988 when the facility became a male detention center and the work was deemed inappropriate. According to the Brooklyn Museum, which included the work in the 2017 exhibit “We Wanted a Revolution: Black Radical Women, 1965-1985,” it was saved by a warden, restored, and put back on display in the new Rose Building. M. Center for Women Singers. The final move of the painting was announced at the end of December by Chirlane McCray, wife of former New York Mayor Bill de Blasio, as she ended her tenure as first lady. A large part of New York City’s success story is how women have contributed to all aspects of the city’s development, â€McCray noted in her announcement. â€œBut too many of these stories remain unknown, especially for women of color whose accomplishments have been literally wiped from the history books. I am proud that this historic painting is kept at the Brooklyn Museum where children can see it and know they too can create works of art that ignite change, expand awareness and stimulate the imagination.

The Art for Justice Fund, run by philanthropist Agnes Gund, will fund a new work to fill the painting’s now vacant place on Riker’s Island. â€œI am happy to know that Faith Ringgold’s important painting will be moved to a permanent residence at the Brooklyn Museum, at the artist’s request,â€ said Gund. “It is my fervent hope that we will all see Rikers Island closed, and that all those incarcerated and working there will soon be transferred to a safer and more positive environment.”