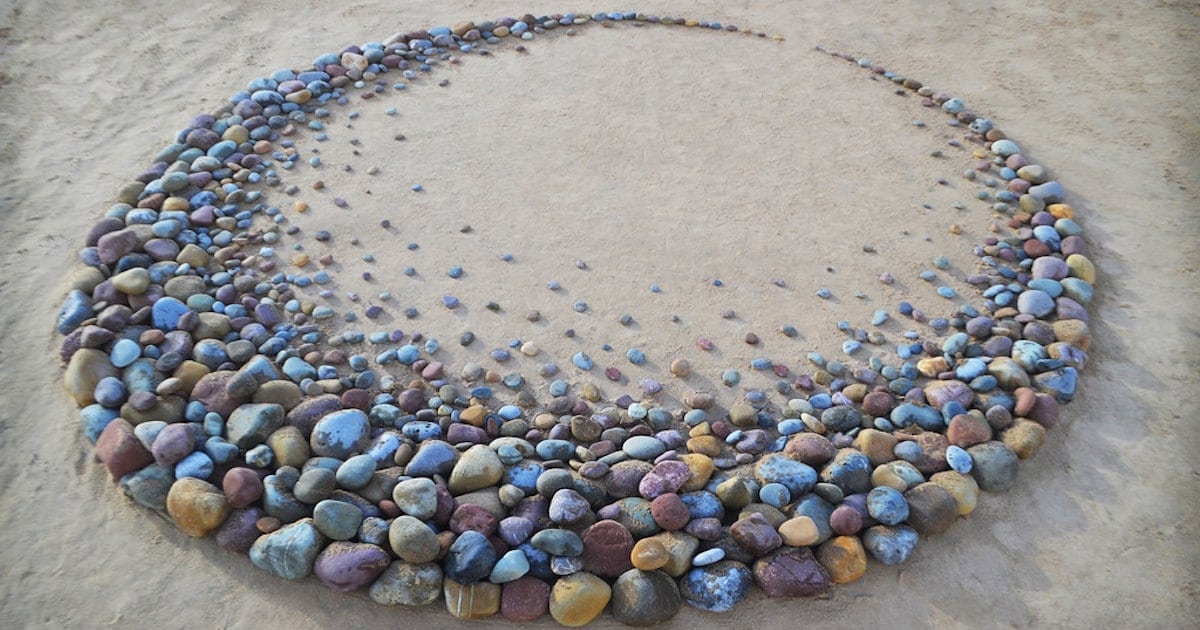 Earthly artist Jon Foreman finds solace in the arrangement of the stones in eye-pleasing formations on the beach. His practice, which he calls Sculpt the World, features rocks shaped into swirling patterns as well as giant circles containing an array of rainbow hues. â€œThis process is therapy for me,â€ Foreman told My Modern Met. â€œThe simple act of placing stone upon stone in the sand is very therapeutic. I’m sure we all enjoy walking on the beach, but I find this process more immersive; to be there in nature, to lose myself in the work, to have left behind me all the stress of everyday life.

Foreman lives in Pembrokeshire, Wales, which is home to a generous coastline. “The beaches here are truly exceptional and there are so many,” he explains, “I doubt I have even visited half of them.” When he arrives on a beach, he plans to spend four hours (on average) there to create his work of art. Often times, it is with only partial planning of what the finished part will look like. â€œSometimes I’ll have an idea of â€‹â€‹what I would like to try but very rarely I get it fully. I like not knowing exactly how it’s going to turn out until he’s here in front of me. While many may find working without a plan intimidating, Foreman finds the unknown heartwarming. Having no preconceived idea of â€‹â€‹what he will create, he finds that he is more likely to experiment and develop new facets of his work.

The arrangement with the stone showed Foreman some of his unexpected qualities. He noticed that rock, despite its strength, changes when it is grouped together; they become “malleable,” reveals Foreman. â€œThere are so many ways to work with stone; the color, the size, the shape, the angle in which it is placed, the direction in which it faces, endless possibilities. While stone isn’t my only go-to material, it’s currently my favorite because it presents so many different opportunities.

Land art is ephemeral and will eventually be taken over by the land from which it comes. â€œIt often becomes a race towards the end as the waves get closer,â€ says Foreman. “I try to stay to see the work fade away and capture the moment of impact.” It could be a poignant time, but Foreman chooses to see beauty in the short lifespan of his work. â€œI create using materials made from this environment for this environment. The tide brings everything back to the tide line, and I come back the next day with an empty canvas to work on. People often ask if it bothers me that the job has to go away eventually. To that I say: not at all. If anything, the fact that it’s short lived makes it more special to me.

My Modern Met has granted permission to feature photos of Jon Foreman.

Interview: The artist walks in the snow all day to create giant geometric patterns on foot

Interview: Ephemeral Land Art by a man who discovered his creativity in nature